MPI of Biochemistry,
Am Klopferspitz 18,
82152 Martinsried

Photosynthesis sustains most of the life on our planet. It harvests energy from sunlight, while generating oxygen and removing carbon dioxide from the atmosphere. The process takes place in the chloroplasts of plants and algae. Researchers in the team of Wolfgang Baumeister at the Max Planck Institute of Biochemistry in Martinsried near Munich were recently successful in revealing the native structure of the chloroplast in 3D. “The results are the first of their kind and provide us with new insights into the mechanisms of photosynthesis”, says Benjamin Engel, first author of the study. The results were recently published in the journal eLife. 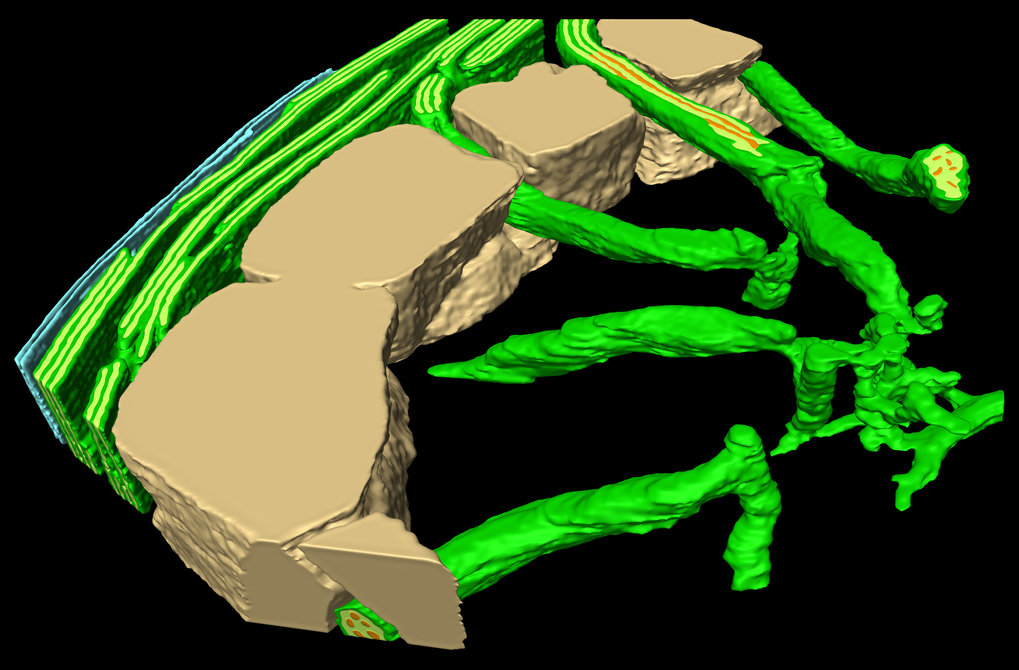 So far, researchers who wanted to observe tiny structures inside of cells had to use traditional electron microscopy. However, this method requires several preparation steps that damage cellular structures and limit the resolution and accuracy of the images. By using cryo-electron tomography, Wolfgang Baumeister and his team are able to avoid these steps by rapidly freezing the cells. Moreover, this allows them to visualize the internal architecture of cells in a close-to-living state. Using this technique, the scientists investigated the three dimensional structures of chloroplasts in the alga Chlamydomonas, shedding new light on their assembly and function.

Two spatially separated reactions take place during photosynthesis: while energy is harvested from sunlight in compartments called the thylakoids, carbon dioxide is fixed to form sugar molecules in a compartment called the pyrenoid. It was not understood how these processes could be coordinated. The new 3D images revealed the detailed structures of tubules that connect the pyrenoid with the thylakoids, providing conduits for the diffusion of energy molecules and sugars between these two separated parts of the chloroplast (see figure).

Besides the fact that there are connections between the two reaction compartments, the scientists were also able to show how the thylakoids receive new proteins and how the photosynthesis enzymes are organized: “In the pyrenoid, there are many units of the photosynthesis enzyme RuBisCO”, explains Benjamin Engel, scientist at the MPI of Biochemistry. “Our results show for the first time that these units are packed in a hexagonal arrangement.” In the future, the authors aim to elucidate how this RuBisCO organization is formed and whether more proteins are involved. [HS]