Guardians of the Gate

To travel between the cytoplasm and the nucleus, proteins must pass through a gateway called the nuclear pore complex (NPC). However, it is unknown whether the cell can monitor the proteins that go through the NPC. Using in situ cryo-electron tomography to look into cells that are frozen in a life-like state, scientists at the Max Planck Institute of Biochemistry discovered that NPCs are decorated with highly organized clusters of proteasomes, molecular machines that destroy misfolded and mislocalized proteins to ensure healthy cell function. These NPC-tethered proteasomes may perform surveillance of NPC trafficking to ensure that only the correct proteins pass into, or out of, the nucleus. The study is published in the journal PNAS. 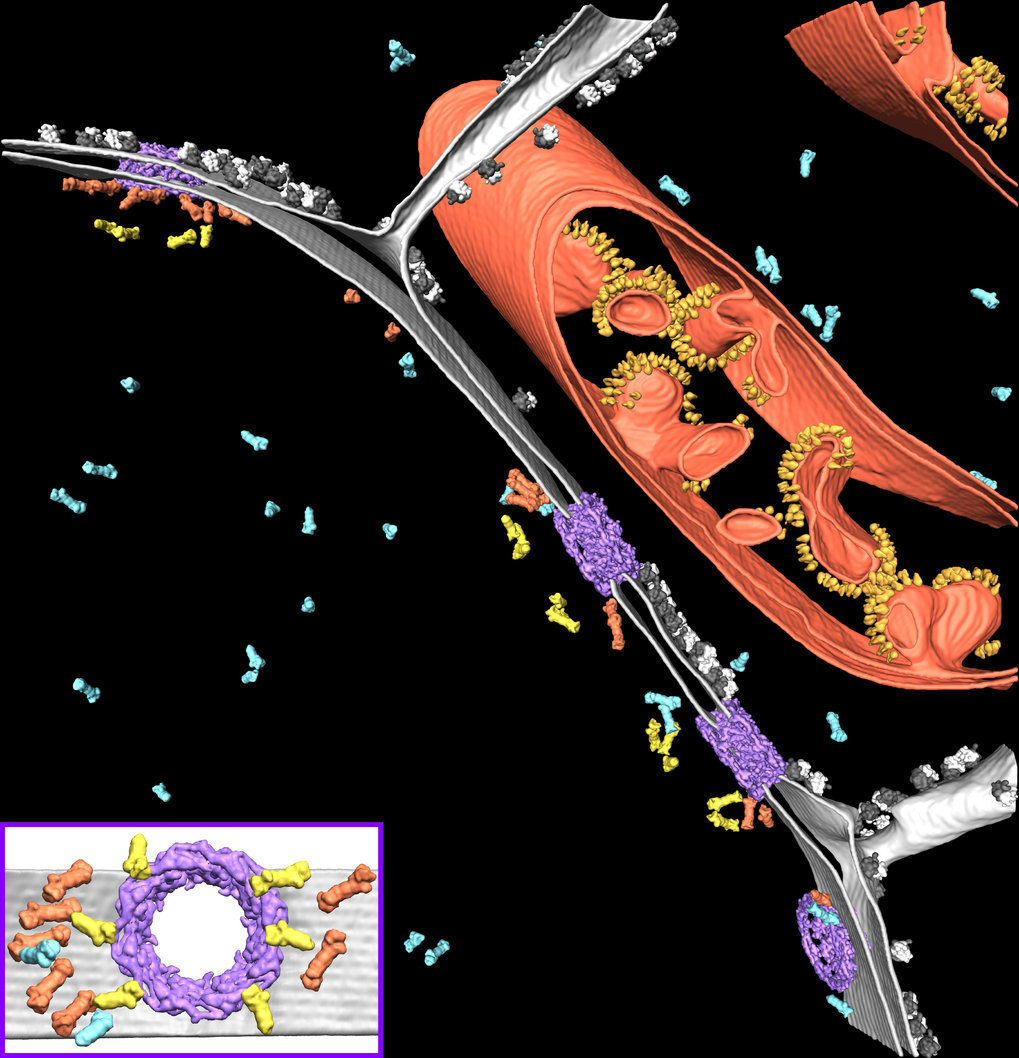 Segmentation of a cryo-electron tomogram, showing the native cellular environment around the nucleus. Proteasomes tether ... [more]

Segmentation of a cryo-electron tomogram, showing the native cellular environment around the nucleus. Proteasomes tether to NPCs (purple) at two distinct sites (organge: membrane-tethered proteasomes, yellow: basket-tethered proteasomes, blue: free proteasomes). The nuclear envelope (grey), ribosomes (black/white) and a mitochondrion (red, with rows of yellow ATP Synthase) are also shown. Inset: view of an NPC from inside the nucleus.

Segmentation of a cryo-electron tomogram, showing the native cellular environment around the nucleus. Proteasomes tether to NPCs (purple) at two distinct sites (organge: membrane-tethered proteasomes, yellow: basket-tethered proteasomes, blue: free proteasomes). The nuclear envelope (grey), ribosomes (black/white) and a mitochondrion (red, with rows of yellow ATP Synthase) are also shown. Inset: view of an NPC from inside the nucleus.

A gateway has opened between two universes. Invaders from one universe are coming through the gate, and if they make it through, the other universe will be thrown into chaos. Just when all hope seems lost, guardians arrive at the gate and fight back the invaders. This may sound like a scene from a science fiction movie or a comic book, but it is actually taking place at the gateway between the cytoplasm and nucleus inside a single cell.

Cellular Superheroes
Did you know that there are superheroes inside the cell? These heroes are called proteasomes. They are large protein complexes that defend the cell by destroying misfolded and mislocalized proteins. Without protection from the proteasomes, cells eventually die because they are unable to get rid of these dangerous proteins. While the importance of proteasomes is clear, it is unknown whether proteasomes localize to cellular regions that need their help the most. How can the cell ensure that there are enough proteasomes at the right place, at the right time? To explore this question, researchers in the department of molecular structural biology used in situ cryo-electron tomography (cryo-ET) to visualize proteasomes within their native cellular environment.

Freeze! Snapshots of Proteins in Action
To perform in situ cryo-ET, cells are rapidly frozen and then thinned with a focused ion beam to make transparent “windows” into the cells that can be imaged by a transmission electron microscope. The resulting three-dimensional images, called tomograms, reveal the crowded environment of the cell in its native state and at a resolution that is high enough to see the fine details on protein structures. “It’s a revolutionary technique,” explains Sahradha Albert, first author of the study. “We are diving into a whole new world – a world that has been invisible to us until now. This study contains the most cellular tomograms ever combined for one project. Imaging so many proteasomes gave us the power to use structural averaging to see the functional states and binding interactions of each proteasome. We then placed each of these proteasomes back into its cellular context.”

A New Function for Proteasomes: NPC Surveillance
To their surprise, Albert and colleagues discovered that many proteasomes were attached to NPCs, which serve as gateways for the transport of molecules between the cytoplasm and nucleus. Using high-resolution averaging and nanometer-precision localization, they observed that tethering proteins attach these proteasomes to two sites on the nuclear side of the NPC: the NPC’s nuclear basket and the membrane encircling the NPC. The averages also revealed that these proteasomes are functional— they were caught in the act of destroying proteins.

It is well known that in order for larger proteins to pass through the NPC, they must be guided by a protein called importin. But is this guide enough to ensure that only the right proteins make it through the gate? Membrane proteins and small soluble proteins are able to diffuse through the NPC without importin. What if unwanted proteins slip through? The NPC-tethered proteasomes may provide an answer. By encircling the NPCs, these proteasomes could be part of a “border control” surveillance mechanism, where undesirable proteins coming through the NPC are identified and destroyed. “This striking new observation provides a whole new perspective on the regulation of NPC trafficking,” says Benjamin Engel, corresponding author of the paper. “It raises many questions. Our study is really just the tip of the iceberg.”

Putting the Superhero Team Together
Proteasomes do not defend the cell on their own. Like most superheroes, they require a support team. While proteasomes are powerful degradation machines, they need the help of other proteins to tell them where to go and what to destroy. The high-resolution structures generated by Albert and colleagues revealed that tethers are bound to the NPC-localized proteasomes. However, it remains a mystery what proteins build these tethers and how they recruit proteasomes to the NPC. Proteasomes degrade proteins that have been marked with poly-ubiquitin chains, modifications that are added by a class of enzymes called E3 ligases. The cell has hundreds of different versions of this enzyme, and each recognizes different substrates. This provides specificity for protein degradation, as the E3 ligases selectively tell the proteasomes what to destroy. The question is, which E3 ligases are acting at the NPC? “We know the proteasomes are performing an important task at the NPC, which we think is the surveillance of proteins passing through the gate,” say Engel. “However, the next step is to identify the proteins that work with the proteasome at the NPC. What are the members of the team, how do they function together, and what proteins are they degrading? Once we learn this, then we will understand how and why the proteasomes are guarding the gateway to the nucleus.”