Plants and algae use the enzyme Rubisco to fix carbon dioxide, removing it from the atmosphere and converting it into biomass. However, Rubisco performs this reaction slowly and can also have unwanted reactions with oxygen. Algae have figured out a clever way to increase the efficiency of carbon fixation. They gather most of their Rubisco into a ball-shaped microcompartment called the pyrenoid, which they flood with a high local concentration of carbon dioxide. If we learn how algae build the pyrenoid, we may be able to engineer it into plants, creating crops that remove more carbon dioxide from the atmosphere while producing more food. Combining genetics, cell biology, computer modeling and cryo-electron tomography, an international team of scientists at Princeton University, the Carnegie Institution for Science, Stanford University and the Max Planck Institute of Biochemistry have unravelled the mysteries of how the pyrenoid is assembled. They found that the pyrenoid behaves like a droplet of liquid, which dissolves during cell division to ensure that it is inherited by both daughter cells. This study is published in the journal Cell. 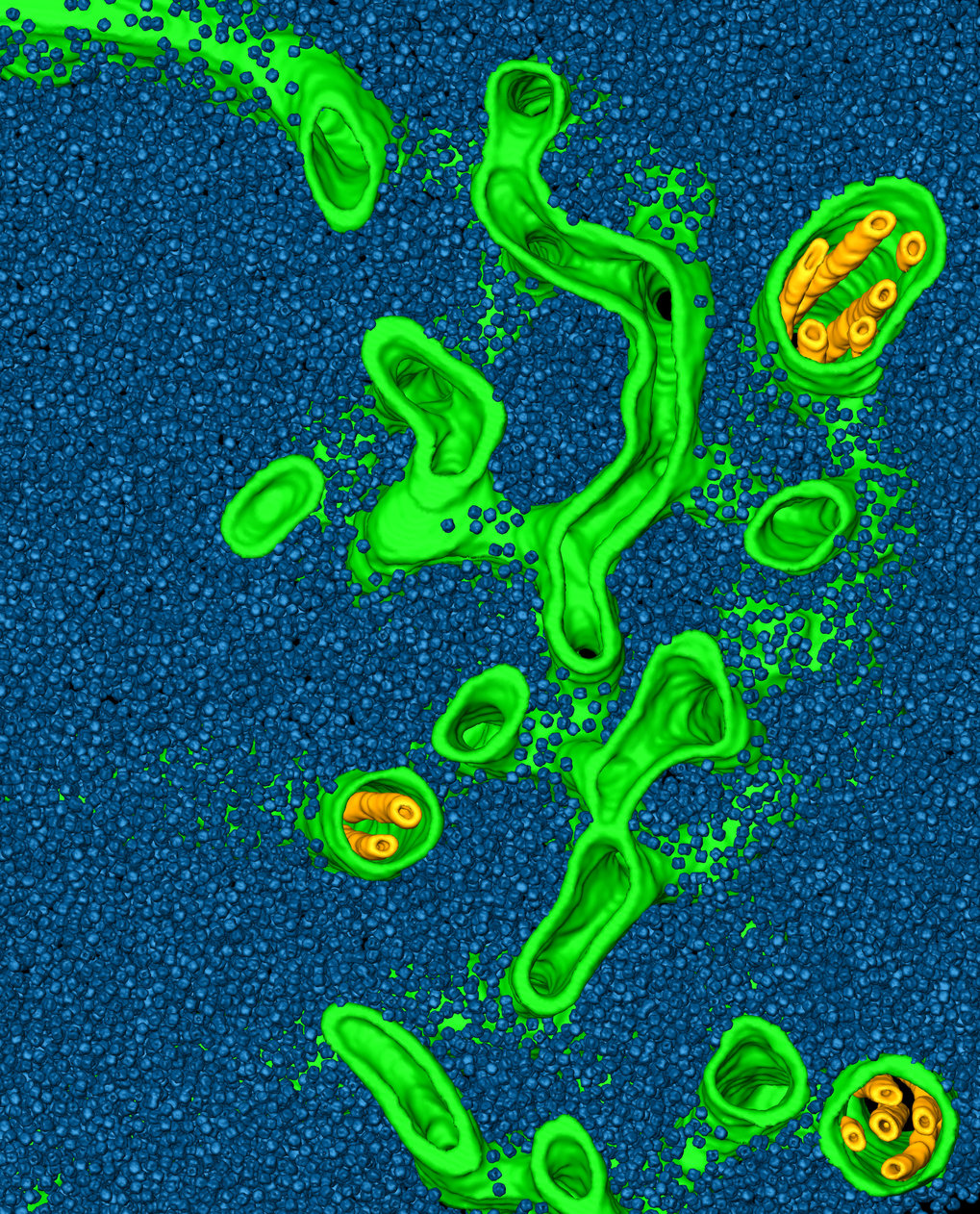 This image depicts a rendering of a cryo-electron tomogram of a Chlamydomonas pyrenoid, with tubule membranes (green and ... [more]

This image depicts a rendering of a cryo-electron tomogram of a Chlamydomonas pyrenoid, with tubule membranes (green and yellow) awash in a “sea” of Rubisco enzymes (blue).  Benjamin Engel and colleagues found that Rubisco proteins in the pyrenoid are packed together like a liquid.

This image depicts a rendering of a cryo-electron tomogram of a Chlamydomonas pyrenoid, with tubule membranes (green and yellow) awash in a “sea” of Rubisco enzymes (blue).  Benjamin Engel and colleagues found that Rubisco proteins in the pyrenoid are packed together like a liquid.

A warming planet
Our planet’s climate is changing. Each year brings record high temperatures that cause extreme weather, melting polar ice and rising ocean levels. Global warming is intensified by greenhouse gasses such as carbon dioxide, which prevent the escape of heat from our atmosphere. Using energy from the sun in a process called photosynthesis, plants and algae act as natural air filters, removing carbon dioxide from the atmosphere while replacing it with the oxygen that we breathe. About half of the photosynthesis on Earth is performed in the ocean by single-celled algae. Many of these algae fix carbon dioxide more efficiently than land plants by concentrating most of their Rubisco into a microcompartment called a pyrenoid. Despite the importance of the pyrenoid to the global environment, until recently, it was unknown how this microcompartment assembles.

Visualizing every Rubisco within the pyrenoid
The first breakthrough in understanding pyrenoid assembly came when the team of Martin Jonikas, leader of the Carnegie/Stanford and Princeton groups, identified a linker protein in the green alga Chlamydomonas that binds Rubisco enzymes together within the pyrenoid. Without this “molecular glue,” the pyrenoid does not form. However, it was not known how the Rubisco proteins are organized within the pyrenoid, with classical electron microscopy studies suggesting that the pyrenoid is a highly ordered solid crystal.

To answer this question, the team lead by Benjamin Engel at the Max Planck Institute of Biochemistry used cryo-electron tomography to examine the molecular organization of the pyrenoid within Chlamydomonas cells that were frozen in their native state, avoiding the artefacts caused by sample preparation for classical electron microscopy. This high-resolution imaging technique enabled Engel and colleagues to precisely measure the positions of the thousands of Rubisco enzymes within the pyrenoid. Instead of crystalline organization, they found that the pyrenoid only has short-range order. Engel explains this result: "If you compare our measurements to the organization of molecules inside liquids, there are very clear similarities. This suggests that pyrenoids are actually liquid-like structures."

Like oil and water
In order to prove that the pyrenoid behaves like a liquid, Elizabeth Freeman Rosenzweig, first author of the study, used fluorescence microscopy to measure Rubisco movement within living cells. She used a high-powered laser to destroy the signal from fluorescent labels attached to Rubisco in half of the pyrenoid, while leaving the signal in the other half of the pyrenoid intact. Within minutes, the fluorescence spread throughout the pyrenoid, showing that the enzymes move around as they would in a liquid. Thus, the pyrenoid is a liquid microcompartment floating within a second larger liquid compartment, the chloroplast. This is an example of “phase separation,” a physical phenomenon that has recently been shown to play a role in compartmentalizing many of the cell’s proteins. Freeman Rosenzweig uses an analogy to explain how it works: “Although the forces that cause the pyrenoid’s phase separation are different, it is easy to think about it terms of a familiar image: a dish of oil and vinegar that you might get at an Italian restaurant. The oil and vinegar are both liquids, but they don’t mix. The vinegar instead forms droplets that float in the pool of oil. Similarly, we think the pyrenoid forms a droplet within the liquid environment of the chloroplast.” 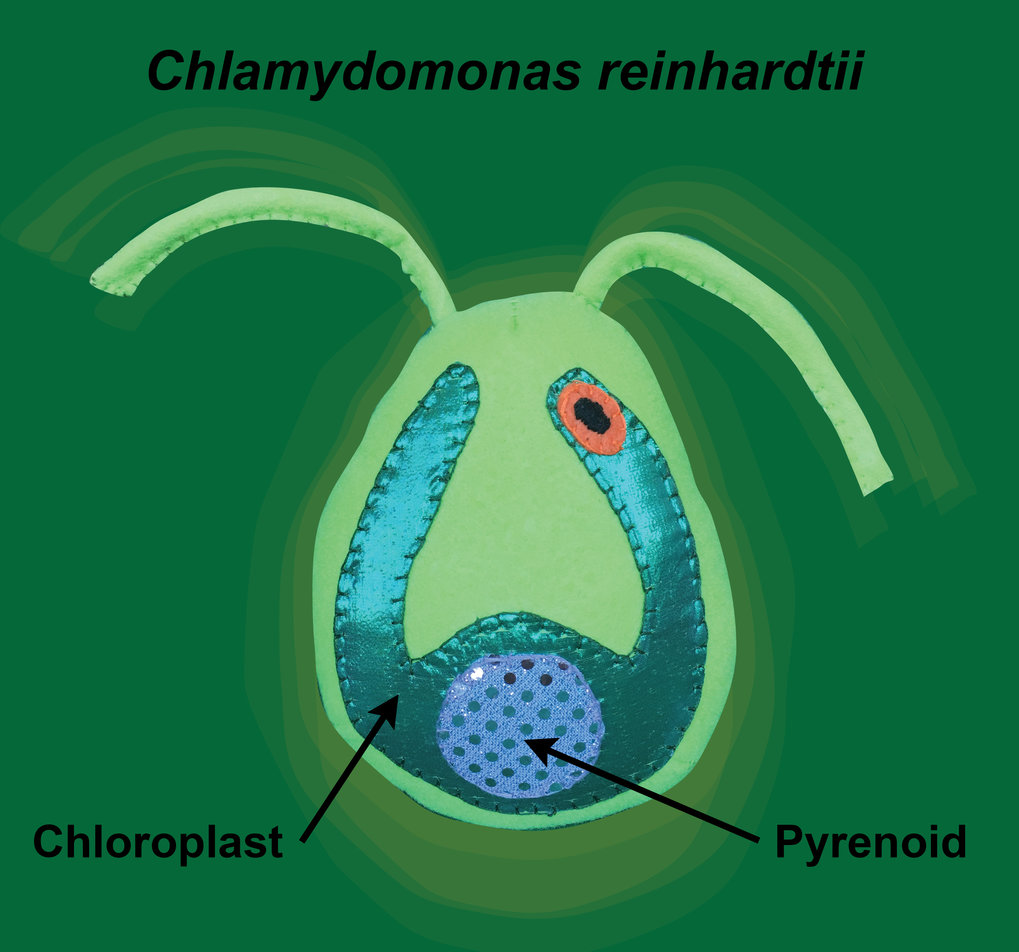 In this image, "Sammy the Chlamy" illustrates how the pyrenoid is a phase-separated microcompartment within the ... [more]

In this image, "Sammy the Chlamy" illustrates how the pyrenoid is a phase-separated microcompartment within the chloroplast of the Chlamydomonas cell.

In this image, "Sammy the Chlamy" illustrates how the pyrenoid is a phase-separated microcompartment within the chloroplast of the Chlamydomonas cell.

Freeman Rosenzweig also discovered that there is a special time when the “oil” of the chloroplast stroma and the “vinegar” of the pyrenoid do mix. As the single-celled algae divide into two daughter cells, the pyrenoid undergoes a “phase transition,” partially dissolving into the surrounding stroma of the chloroplast. Ordinarily, the remaining pyrenoid is pinched into two, with each daughter cell receiving half. However, sometimes this division fails, leaving one of the daughter cells with no pyrenoid. The researchers observed that cells that failed to receive half of the pyrenoid could still form one spontaneously, or “de novo.” They suspect that each daughter cell receives some of the dissolved pyrenoid components, and that these components can condense into a new pyrenoid the way that raindrops condense from water vapor. “We think the pyrenoid dissolution before cell division and condensation after division may be a redundant mechanism to ensure that both daughter cells get pyrenoids,” Jonikas said. “That way, both cells will have this key organelle that's critical for assimilating carbon.”

Better crops for a changing world
Jonikas and his team have big plans for the applications of this knowledge. They want to engineer pyrenoids into crops such as wheat and rice to address problems including climate change and world hunger. “Understanding how algae can concentrate carbon dioxide is a key step toward the goal of improving photosynthesis in other plants,” Jonikas said. “If we could engineer other crops to concentrate carbon, we could address the growing world demand for food.” The Jonikas group has even created their own mascot, Sammy the Chlamy, who uses a music video to teach us about the power of the pyrenoid:

Some portions of this article were provided courtesy of the Princeton University Office of Communications.