In healthy cells, small amounts of reactive oxygen radicals called ROS are produced in many processes, such as cell respiration or fat burning. While the cell can handle low concentrations, the excessive increase of ROS, for example caused by viral infection, leads to cell death. Researchers from the Max Planck Institute of Biochemistry now report in Nature Immunology about a newly discovered "oxeiptosis" signaling pathway. This pathway measures intracellular ROS concentrations and can thereby control cell death or survival of the cell. Since ROS are produced in a variety of diseases, the researchers believe that this pathway plays an important role in the control of a wide range of pathological processes. 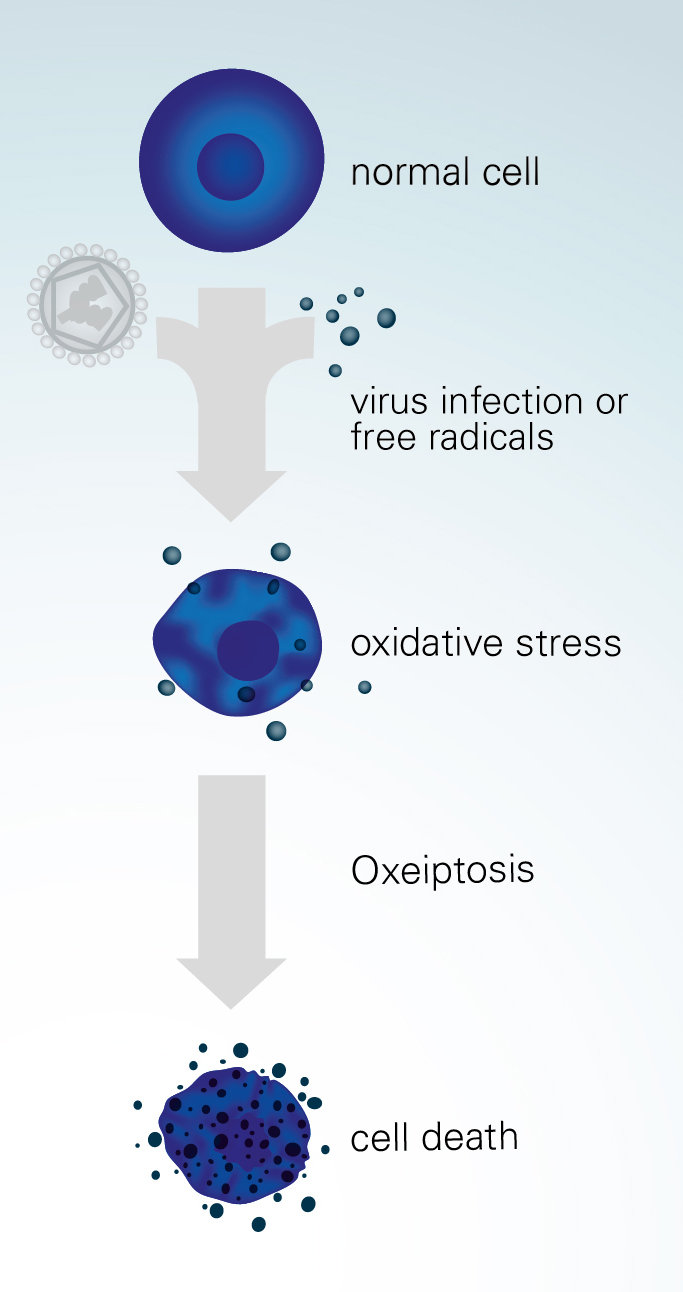 Living and dying is one of the most existential questions of a society. How to regulate life and death in cells, the smallest unit of life, is investigated by many scientists. A number of well-studied signaling pathways are known that lead to so-called “programmed cell death” that can be triggered through integration of stimuli from outside or inside the cell. The so-called “programmed cell death” can be triggered by a number of well-studied signalling pathways, which integrate intracellular and external stimuli. Depending on the exact way a cell dies, an immune reaction may also be triggered.

Reactive oxygen species (ROS) are known activators of cell death. ROS are formed in healthy and abnormally altered cells and function in a dose-dependent manner according to the quote from Paracelsus: "The dose makes the poison". Oxygen radicals can have destructive effects on cells when accumulating at high doses. Researchers from the research group of Andreas Pichlmair "Innate Immunity" at the Max Planck Institute of Biochemistry now show that the protein molecule KEAP1 can sense an increased amount of ROS and initiate a novel form of controlled cell death.

Oxeiptosis - oxygen radicals lead to controlled cell death
"In general, it was known that KEAP1 functions as a ROS sensor," explains Pichlmair. "At low levels of ROS, KEAP1 changes its structure to activate the production of cell-derived antioxidants." This mechanism regulates the amount of intracellular ROS. "We found that KEAP1 can change its function at high amounts of ROS and turns into a cell death mediator", continues Pichlmair. "We were able to identify molecules that are important for this signaling pathway." When components of this signaling pathway were removed experimentally, cells survived high levels of ROS. Since this is a new, previously unknown signaling pathway, the scientists call it "oxeiptosis" – death caused by oxygen radicals.

Oxeiptosis in viral infections
Pichlmair and colleagues were able to show that oxeiptosis is also activated during viral infections. When components of the oxeiptosis signaling pathway were removed, cells survived better after virus challenge. "Programmed cell death in complex organisms has evolved to protect the organism as a whole at the expense of individual cells," says Pichlmair. The importance of this cell death mechanism is emphasized by the ability of many evolutionarily distant viruses that can actively modulate this signaling pathway.

Infection of mice with the flu virus ‘influenza’ leads to inflammation in the lungs. If an essential part of the oxeiptosis pathway was absent in these animals, inflammatory processes were much more aggressive. Oxeiptosis therefore leads to an anti-inflammatory type of cell death. If cells are unable to activate this type of cell death due to pathological changes in critical components, an inflammatory cell death program will take over and cause serious tissue damage.

Oxeiptosis probably plays a role in many pathological situations. For example, it has already been described that essential components of the oxeiptosis pathway are mutated in certain cancers. By identifying this signaling pathway, the scientists hope to find new treatments against infectious diseases and cancer.